Converting an Apple Newton keyboard from DIN-8 to USB

For some reason, recently I got it into my head that I wanted an Apple Newton keyboard. Who knows how these ideas get planted in ones mind? I have a general interest in retro Apple equipment, but have never actually owned, or even used, a Newton before. But the Newton keyboard accessory is just so small and cute, it has an appeal all of its own. A keyboard is still the primary interface method between a human and computer, too, so I figured I could justify getting one. The keyboards I currently own are fairly esoteric, so a Newton keyboard would be a fine addition to the collection.

The problem with actually using said keyboard is that the connector isn’t really compatible with anything. It uses a DIN-8 connector, which is the same physical size as Apple’s old ADB connector, but is not actually compatible with ADB. Before buying, I searched around on the ‘net and found a blog post by one Jim Lombardo, which showed how he used a 5V microcontroller to translate the output of the Newton keyboard to something that a modern computer can use. I had no experience with using a programmable microcontroller before, but the instructions/source code were all there, so figured I could suss it out. 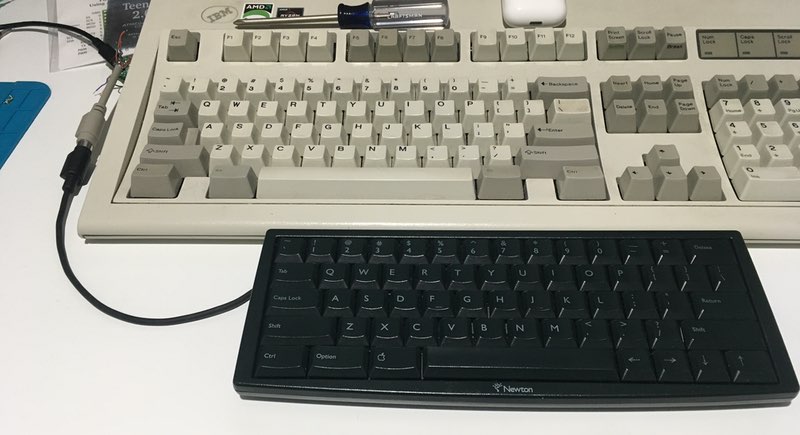 The Newton keyboard alongside my Model M. Notice the mess of wires where the DIY adapter is.

Fortuntely, everything worked without a hitch. A little solder and programming the controller got the keyboard working on my modern Macintosh. The one annoying part was the ugly mess of wires surrounding the DIN-8 -> USB transition. I wanted to enclose everything inside the keyboard, and then just have a USB cable visible, but as you might expect there was not enough room. I also didn’t really want to cut/destroy the old cable, even though I couldn’t see myself ever using it. Opening up the keyboard showed that the DIN-8 cable connects to the keyboard PCB via a 6 pin JST connector. Why couldn’t I disconnect the keyboard’s DIN-8 cable, then solder the JST connector directly to the microcontroller? As it turns out, I could do exactly that. I bought some cheapo connectors on Amazon, and they worked a treat. Now the thin microcontroller is stashed inside the keyboard, with only the USB cable visible. Success! 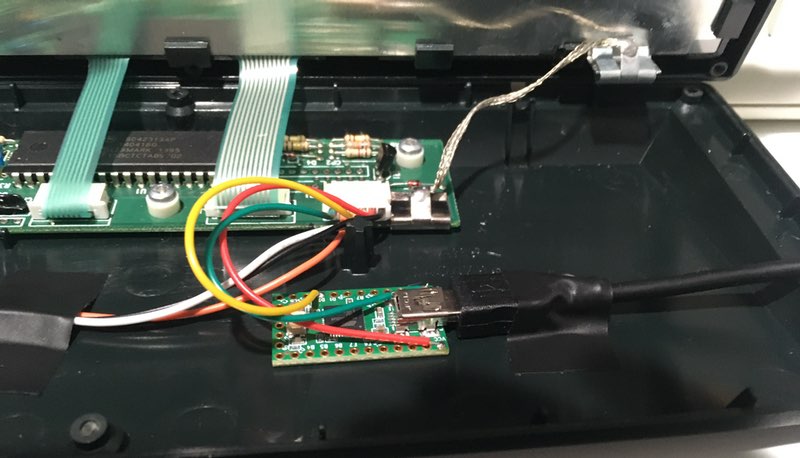 The JST connector soldered directly to the microcontroller inside the keyboard.

So, was all that work worth it? Mmmmmaybe. A Newton keyboard definitely a unique conversation piece. I’m sure I’ll get a few comments about it if/when I bring it back into my office. It’s very compact, as you might expect — even smaller than my 60% Happy Hacking Keyboard. So it frees up a lot of space on your desk. It even has an Apple/command key, which is perfect if you use a Macintosh. The keyboard does have a few downsides, of course: no function keys, and no escape key(!). Pretty funny to use this with my (work-provided) Macbook Pro, which also doesn’t have an escape key. It is only annoying sometimes — I map caps lock -> control, and use control+c with vim, etc. The other thing about the Newton keyboard is that it’s actually not that great of a keyboard. It uses rubber domes and in general is similar to other cheap keyboards you would get in the mid-90s. The keys are a bit stiff, and it takes a while to get used to. I probably wouldn’t use it as my main keyboard, but as a novelty it’s pretty fun.

To sum up: converting a Newton Keyboard to USB is relatively easy, and if you have any interest in this sort of DIY nonsense, I’d say give it a shot! I still have 9 JST connectors that I will never use for anything else, so if you start this project and want one, get in touch via the comments and I’ll mail you one for free.